I am looking for people to maintain and document fritzcap.

Having for now survived metastasised rectum cancer, but still recovering from all the treatments (energy is about 25% of what I used to have), i need to tell you my further health future does not look bright. I have passed the moment of being sad about that and now face it as a fact of life: 90% of my peer group gets back metastases within 10 years time the chance I will make it to age 60 is slim.

It means I am preparing for when things get worse. If in the end things might still continue OK, it means I can have ease of mind instead of being in critical paths of things. Since the only guarantees in life are to die and to pay taxes, that is a good general approach anyway

Since my English is far better than my German writing (reading and speaking is OK, so feel free to respond in German), I have kept current documentation in English despite most of the Frtiz!Box users being in D-A-CH. That need to change to become more balanced.

Documentation wise, the capture interface - used with the --cap_interface parameter - is kind of important, as in this thread quite a few people bumped into getting that correct. In that respect, I was quite surprised to find zero response to [Wayback/Archive] [Frage] - Looking for input on Fritz!Box capture interfaces | IP Phone Forum. I know you can better given this thread is already 24 pages in size.

It means that documentation-wise, that needs to be better so it is easier for people to get started. That will help forum members too.

In addition documentation about configuring encoding in the Fritz!Box correctly (only unencrypted G.711 is supported by fritzcap, and even sometimes that goes wrong) and explaining the why is important. Note that encryption won't be supported as that is impossible without the private key of the VoIP server (even with that, it is kind of hard todo, just search for people that have done it in Wireshark). Other encodings might be possible given the cap2wav shell script floating around this thread.

Both from a code and documentation perspective, it is important to get the GitHub - jpluimers/fritzcap: Issues list synced with this thread.
As I don't have enough energy to get through all the 24 pages, I need help with that.

It would be cool if a few of the regulars in this thread would be so kind to split the pages among them and verify on each page if things asked there are covered in the issues and/or documentation and if not: add a new issue (or update an existing issue) linking to the messages here.

I know the syntax on this forum is vastly different from Markdown used on GitHub, but the issues do not need to be perfectly adhere to the GitHub flavoured Markdown: basic writing and formatting syntax, just plain text is OK (note the The Ultimate Guide to Markdown is easier to get started with Markdown than the GitHub documentation: feels a bit like the AVM documentation where blog posts and forums often are easier to get started with).
For me, I am fine with issues starting with a short broken English introduction section, then continuing the details in German both in rudimentary text. Maybe some volunteers then can help translating those parts in more proper English or Markdown.

Code wise, I am thinking about for instance:
- getting changed postulated in the forum into the fritzcap codebase (for instance there seems to be a fix around for making the capture directories and filenames more descriptive).
- command-line switch to go from internal G.711 support to cap2wav
- compressing to mp3, flac, ogg, aac or other lossy or lossless audio formats
- running fritzcap as a Windows or Linux service
- making fritzcap more robust (autostart features upon failure - needs good failure detection! - or restart after a certain time of inactivity with the chance of missing a call)

I am mainly interested to keep things centered around the GitHub repository as the organisation there is much more suited to link code/documentation/issues than the forum is.

As an intermediate I could start a complete new thread that is only used as liaison between this forum and the GitHub repository.
Please let me know your inputs on that.

Hello Jeroen,
Firstly, thank you for the words of praise, and secondly, I wish you a speedy recovery and all the luck one could need with such an illness. Unfortunately, my English is no longer the best since I haven't been abroad for 30 years.

Now to your request:
I would be happy to work on the project. Unfortunately, I am still very busy at work and in my private life, so I cannot devote 100% of my time to the project at the moment.
Maybe we should open a new thread here, as a project group "Development Fritzcap". I'll just ask the moderators if they have any ideas on how to implement this. Here it makes sense to work together to avoid duplication of work.
I also think it's important to keep the source code in the GitHub repository. Unfortunately, it's not everyone's cup of tea to get information from the repository, even I as a programmer sometimes find it difficult.

Anyway, I would like to work on the project - but please not under time pressure. Where I can help and improve something, I'm happy to participate.
There are other specialists here in the forum, so maybe we'll get together somehow.

Many greetings from stormy Allgäu
Chris

Thanks @jeroenp for your work so far. It's a good idea to lay your baby into safe hands while you can do it. Of course, I wish you the very best for your health, but to be realistic, cancer is an asshole and chances are, you might make it, but also there's a chance, you won't.

I'm also quite occupied with family and my own stuff. Thus, I would offer to translate English docs into German if there's a maintainer for the docs to cooperate with.
I won't be able to check every aspect in the English docs for validity.
Toggle signature
FRITZ!Box 7590 - FRITZ!Fon C6 - Grandstream WP810 - Unify WL4 - Jabra Engage 75 mit Bria 6 - Mobotix D16 - UniFi U6 Pro - Synology RS818+
S

Software offered by myself for the public may be found at: https://github.com/PeterPawn 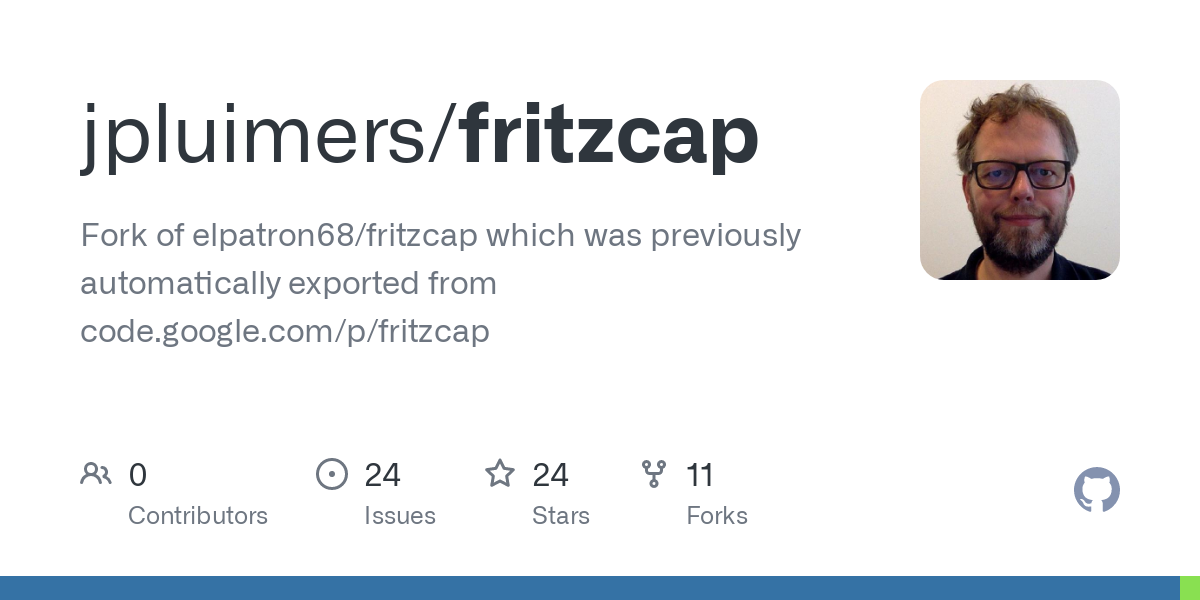